3.
What does your car’s odometer record?

4.
When discussing an object with a velocity, what physical quantity changes over time?
5.
Which of the following best describes the relationship between instantaneous velocity and instantaneous speed?

6. Use the graph to describe what the runner’s motion looks like.
Figure 2.25

How are average velocity for only the first four seconds and instantaneous velocity related? What is the runner’s net displacement over the time shown?

8. A graph of velocity vs. time of a ship coming into a harbor is shown below. 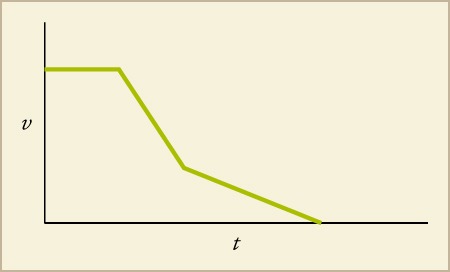 Describe the acceleration of the ship based on the graph.

9.
Boat A and Boat B are traveling at a constant speed in opposite directions when they pass each other. If a person in each boat describes motion based on the boat’s own reference frame, will the description by a person in Boat A of Boat B’s motion be the same as the description by a person in Boat B of Boat A’s motion?
10.
Passenger A sits inside a moving train and throws a ball vertically upward. How would the motion of the ball be described by a fellow train passenger B and an observer C who is standing on the platform outside the train?

11.
Is it possible to determine a car’s instantaneous velocity from just the speedometer reading?
12.

13.
Rhianna and Logan start at the same point and walk due north. Rhianna walks with an average velocity . Logan walks three times the distance in twice the time as Rhianna. Which of the following expresses Logan’s average velocity in terms of ?

14. Explain how you can use the graph of position vs. time  to describe the change in velocity over time. 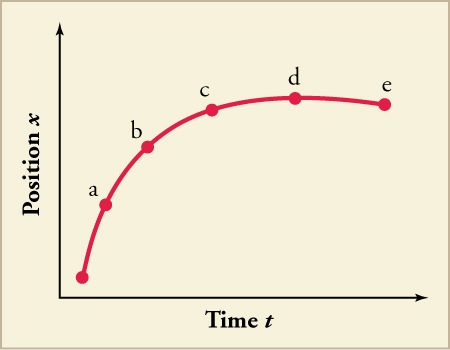 16.
In a coordinate system in which the direction to the right is positive, what are the distance and displacement of a person who walks to the left, to the right, and then to the left?
17.

19. Using the graph, what is the average velocity for the whole 10 s?
Figure 2.26
20.
A train starts from rest and speeds up for 15 minutes until it reaches a constant velocity of 100 miles/hour. It stays at this speed for half an hour. Then it slows down for another 15 minutes until it is still. Which of the following correctly describes the position vs time graph of the train’s journey?

You are characterizing the motion of an object by measuring the location of the object at discrete moments in time. What is the minimum number of data points you would need to estimate the average acceleration of the object?

The National Mall in Washington, DC, is a national park containing most of the highly treasured memorials and museums of the United States. However, the National Mall also hosts many events and concerts. The map in Figure 2.32 shows the area for a benefit concert during which the president will speak. The concert stage is near the Lincoln Memorial. The seats and standing room for the crowd will stretch from the stage east to near the Washington Monument, as shown on the map. You are planning the logistics for the concert. Use the map scale to measure any distances needed to make the calculations below.

The park has three new long-distance speakers. They would like to use these speakers to broadcast the concert audio to other parts of the National Mall. The speakers can project sound up to 0.35 miles away but they must be connected to one of the power supplies within the concert area. What is the minimum amount of wire needed for each speaker, in miles, in order to project the audio to the following areas? Assume that wire cannot be placed over buildings or any memorials.

Part A. The center of the Jefferson Memorial using power supply 1 (This will involve an elevated wire that can travel over water.)

Part B. The center of the Ellipse using power supply 3 (This wire cannot travel over water.)

Part D. The president could also simply fly from the White House to the Lincoln Memorial using the presidential helicopter, Marine 1. How long would it take Marine 1, traveling slowly at 30 mph, to travel from directly above the White House landing zone (LZ) to directly above the Lincoln Memorial LZ? Disregard liftoff and landing times and report the travel time in minutes to the nearest minute.