Newton’s cradle was named after Sir Isaac Newton because it demonstrates some of the physics laws discussed in his work Philosopiae Naturalis Principia Mathematica in 1687.  It is a device used to demonstrate conservation of momentum and kinetic energy. It consists of a series of identical balls (usually five or seven). Each ball is attached  by two strings of equal length to a horizontal frame. This series of balls is arranged so that they barely touch each other.

Watch the video below; then, in your science notebook, answer the following questions.

Watch the short videos of six different collision scenarios. Then, in your science notebook, answer the questions found at the bottom of this page.

wherein p is the momentum, m is the mass, and v is the velocity of the object.

One of the most important laws in physics is the Law of Conservation of Momentum. This law corresponds with Newton’s Law of Action and Reaction, which states, “For every action, there is an equal and opposite reaction.” We usually associate the Law of Conservation of Momentum with colliding objects; hence, it can be stated, “In an isolated or a closed system (no external force in the system), the total momentum of two colliding objects before the collision is equal to the total momentum of the two objects after collision.” This tells us that the momentum in an isolated or a closed system is conserved.

As an equation, the Law of Conservation of Momentum can be expressed as—

Watch the videos of real-life application of the Law of Conservation of Momentum.

2. Compare the momentum and the velocity of the medicine ball with the person who threw the ball in the first part of the second video.

3. Explain what happened to the total momentum of the system after the person caught the medicine ball thrown to him in the second video.

4. An 18-wheeler and a pickup truck had a head-on collision.

A. Which of these two vehicles experienced the greatest force of impact? Provide an explanation.

B. Which of these two vehicles experienced the greatest amount of momentum change? Provide an explanation.

C. Which of these two vehicles experienced the greatest acceleration? Provide an explanation.

As previously mentioned, Law of Conservation of Momentum is usually associated with colliding objects. During collision in an isolated or closed system (no external forces involved), the total amount of momentum of the two colliding objects prior to collision is equal to the total amount of momentum after they collide. To further investigate the Law of Conservation of Momentum, complete the Momentum and Collision Simulation Lab.

Download “Momentum and Collision Simulation Lab” from the Related Documents, and then click on the picture below to complete the investigation. Before starting the simulation lab, click on More Data to show the mass, position, velocity, and momentum of the balls. 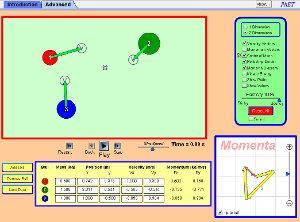 Take the quiz to check your understanding about the Law of Conservation of Momentum.

This resource is a collection of interactive materials, videos, and other digital media assembled in a conceptually scaffolded 5E lesson format. It provides alternative or additional tier-one learning options for students learning about conservation of momentum—IPC TEKS (4)(E). The assignments require student participation with self-checked and teacher-checked formative assessment opportunities. For example, after students record observations and data in their notebooks, they may be prompted to be prepared to share their answers with the class.

Review the resource before assigning it to your students to check for prerequisite knowledge, differentiation needs, and student follow-up requirements as necessary. Students will need a science notebook or something similar in which to record their responses.