Can you make a paper clip float in the air without touching it? Have you ever tried? 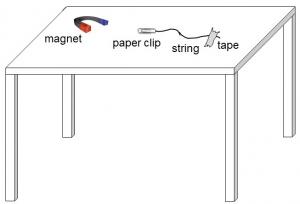 What happened when you moved the magnet away from the paper clip? Why did the paper clip drop? Do you know what force caused that to happen? 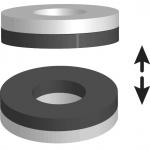 Which activities involved a pushing force?

Which activities involved a pulling force?

Were the forces of magnetism or gravity acting on any of the objects? How do you know?

Click on View Related Items to download and print Explain: Forces at Work Literacy Book. Read the book with a classmate. Stop and discuss each section of the book. 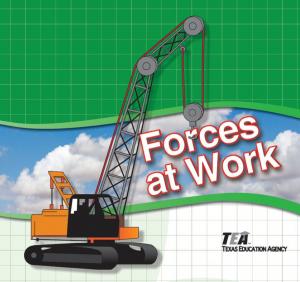 Work through the next activity to process the information in the book.

Go back and review Explore: Forces at Work. Which of those activities involves work? Remember that an object has to be moved, using force, to a new location. If you said rolling a ball, scooting your chair back, feeling magnets repel, dropping a ball, lifting a box, and raising an unopened water bottle all achieve work, you are correct!

Pressing on a wall or your teacher’s desk with your pinkie finger does not involve work. You can press on the wall or desk using all the force you have, but neither object will move to a new location.

Take a minute and explore using a spring scale.

Click on the image to begin the online simple machines activity designed by the Museum of Science and Industry in Chicago.

Evaluate: To Work or Not?

Click on View Related Items to download and print Evaluate: Forces at Work Assessment. Work through the questions, answering in complete sentences.

The force of gravity is introduced in third grade. Some students may know about gravity, but some may not as this point in the lesson. Gravity will be defined in the Explain section of the lesson.

Having materials on hand would be helpful for students to do the Explore activity.

Students will leave the “Work” column blank on Explore: Forces at Work because the concept of work will be defined in the Explain section of the lesson. The “Push” and “Pull” columns focus on the force that causes the objects to move. 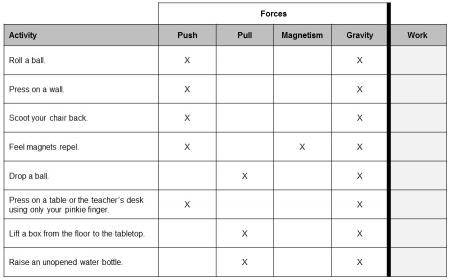 If students understand that gravity is a force that pulls everything toward Earth’s surface, they may place an X  in every box in the “Pull” column, which is perfectly acceptable.

The book for this lesson is content heavy. It may be best to read one section at a time and stop often for discussion and reflection. Allow students time to ask questions or discuss the concepts in the book with a classmate.

Before students begin using spring scales, make sure the scales are calibrated to zero. This can be achieved by sliding a scale or turning a gear or turnstile. Elementary students will use only the newtons scale and ignore the grams scale on a spring scale. Middle school students begin making the connection between force and mass.

The concept of work is defined using two criteria. An object must be moved using force (first criterion) to a new location (second criterion). The definition of work should be kept simple and straightforward in third grade.

In sixth grade, students will calculate work by multiplying force by distance (W = Fd). Work is calculated by how hard and how far you push (or pull) an object. You can exert a great deal of force (pushing on a wall) without doing work if the object to which the force is applied does not move. The force and the motion must be in the same direction (motion is parallel to force). If a door opens and closes, work is not achieved because the door starts and stops in the same location, which means net force is zero.

Third-grade students need to focus only on wheels and axles (wagons, bicycles, cars, wheelbarrows) and pulleys (flag raising) as simple machines. Simple machines make work easier. For example, pulling or pushing a box of bricks across a yard is more difficult than rolling them across a yard in a wagon or wheelbarrow.

Refer back to the activities from Explore. You may need to assist students as they determine which activities accomplished work. 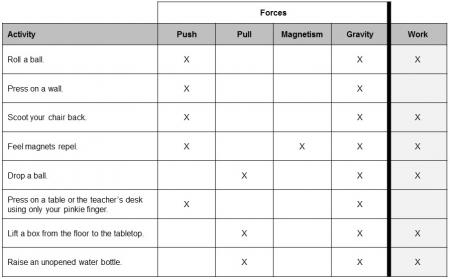 Students can work through all portions of the online interactive, but for the purposes of third grade, they need to focus only on the wheel and axle and pulley.

Students will have the opportunity to experiment and test different tools to accomplish different tasks. As they go through the interactive, students should think about whether forces are involved and whether work is being done.

Students can work independently, in pairs, or in small groups on the assessment. They also could have the option to write the answers or provide the answers to you orally. It may be helpful to provide sentence stems for some students to answer the questions.