Historic Relationships Between Dogs and Humans

In this video segment from Nature, we learn that dogs were the first creatures to be domesticated. Ancient people thought of dogs as creatures of magic and as spiritual guardians. Dogs were often sacrificed and buried with people to protect them with their magical powers. In Mexico today, hairless Xolo (SHOW-low) dogs are believed to heal pain. Around the world dogs are useful to people for protection because of their bark, which acts as an alarm and can intimidate strangers. Barking dogs are a stronger deterrent for burglars than a burglar alarm. 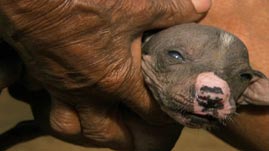