Explore I: Pieces and Parts

By now you already know that Earth has layers, similar to the layers of an onion. What you may not know is that the lithosphere is broken into many pieces. Explore the animation below to learn more about these pieces. How many major pieces are there? What are their names? Record this information in your science notebook as you discover it.
Cite Source
Photo courtesy of the United States Geological Survey

Explain I: Plates and Their Boundaries

The major plates that you need to know about are the following:

You can see the plates again here on the map. There are also arrows on this map indicating movement. Why do you think they are moving? Download the Plate Tectonics Notes page from the "Related Items" section below to record information as you move through the remaining sections of this resource. 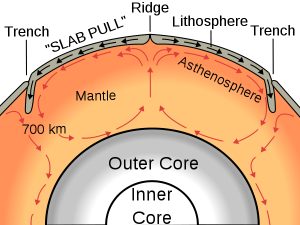 When two pieces of crust move apart from each other, magma escapes and hardens to form new crust. The North American and Eurasian plates are moving away from each other, resulting in a large underwater mountain range called the Mid-Atlantic Ridge. This is the result of the magma escaping through Earth's crust, becoming lava, and finally hardening to form new ocean basins, or ocean floors.

When a piece of oceanic crust collides with continental crust the oceanic crust is denser and then goes beneath the continental crust. This happens in much the same way as when a denser object goes beneath the water and sinks. As you observed in the video, the oceanic crust melts due to the extreme heat and works its way to the surface, usually in the form of volcanoes. These volcanoes can build large volcanic mountain ranges such as where the Nazca Plate (oceanic) collides with the South American Plate (continental) which results in the Andes Mountains on the western coast of South America. Earthquakes may also occur along this plate boundary.

Okay, let's check your understanding of plates and some of their movement so far.

Explore III: Which Movement Is Different?

You certainly noticed that the sliding plates and the plates coming together and building up the land have not yet been discussed.

When two continental plates push together, the result is an upward movement of the accumulating land. This is how many mountain ranges are built. It's similar to laying a piece of paper flat and pushing each end of the piece of paper toward the center. The paper curls upward because the force coming from each side leaves nowhere else for the paper to go. An example of this type of plate movement is the Himalaya Mountains on the border of northern India. Notice the pointed shape of Rupal Peak in the far western portion of the Himalaya Mountains. This shape is characteristic of this type of plate movement. 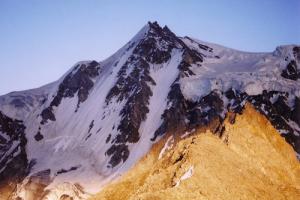 Certain plates slide and grind along each other in opposite directions. This generally results in little creation or destruction of landforms, but it does result in earthquakes, some of which can be quite strong. Notice the image of a portion of the San Andreas Fault below. This is an area in the state of California where two plates (the North American Plate and the Pacific Plate) are grinding alongside each other. This process happens incredibly slowly. When large, sudden movement of the plates occurs, we can see major destruction to buildings, bridges, and streets. 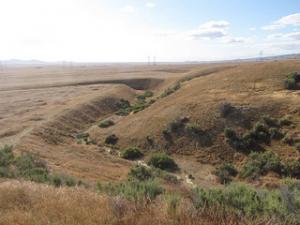 Check your understanding of what you have learned!

Because of the  different types of tectonic plate movements, scientists hypothesize that Earth's continents once looked like this image below. 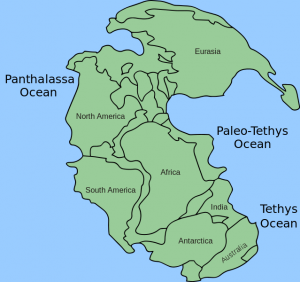 If the plates continue to move in the directions they are moving (see image from Explain I), then what do you think will happen? NASA has reported an interesting hypothesis about what will happen hundreds of millions of years from now. Click the NASA logo below to visit its Science News site and learn a little bit about this theory and how NASA satellites are involved.