Resource ID: BM2L3
Grade Range: 9 - 11
Sections
How Do You Get Mutations in Your DNA? Gene Mutations Chromosomal Mutations What Effects Do Mutations Have on Living Organisms? Vocabulary Application

How Do You Get Mutations in Your DNA?

The sequence of bases in DNA are like the letters of a coded message. What would happen if those letters changed accidently, altering the message? Would the cell still understand its meaning? For example, let’s say you needed to call someone about a job and the phone number was 678-3245, but you were given a message to call 768-3254. Since you did not receive the correct message you wouldn't not be able to reach the person you intended.

Now and then cells make mistakes in copying their own DNA. They may insert the wrong base or even skip a base as a strand is put together. These variations are called mutations.

Many mutations are produced by errors in genetic processes like DNA replication. Some mutations arise from mutagens—chemicals or physical agents in the environment that cause a mutation.

Directions: Watch the video Gene Mutations to learn more about mutations and what causes them.

There are two basic categories of mutations: gene mutations and chromosomal mutations.

A gene is essentially a sentence made up of the bases A, T, G, and C that describes how to make a protein. Any changes to that sentence can alter the gene's meaning and change the protein that is made, as well as how or when a cell makes that protein.

Gene mutations that involve changes in only one or a few nucleotides are called point mutations, because they occur at a single point in the DNA sequence. There are three types of point mutations.

In substitution mutations, one base is changed to a different base. Substitutions usually affect no more than a single amino acid, and sometimes they have no effect at all. A substitution mutation is equivalent to changing one letter in a sentence, as in the following example, where we change the "c" in "cat" to an "h": 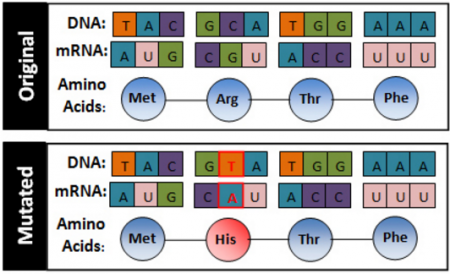 Mutations that result in the addition of extra DNA are called insertion mutations. An example is in the following sentence, where an extra "a" has been added. 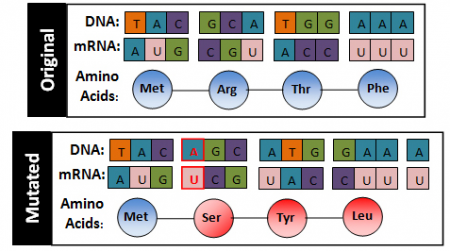 Mutations that result in missing DNA are called deletion mutations. In this example, the deletion eliminated the letter "c." 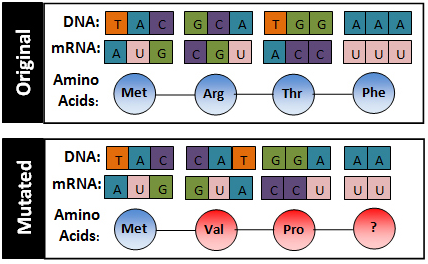 Insertions and deletions are also called frameshift mutations. Because our cells read DNA in three letter "words," adding or removing one letter changes each subsequent word. This type of mutation can make the DNA meaningless and often results in a shortened protein.

A deletion chromosome mutation involves the loss of all or part of a chromosome.

A duplication chromosome mutation produces an extra copy of all or part of a chromosome.

An inversion chromosome mutation reverses the direction of parts of a chromosome. 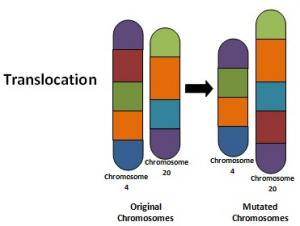 A translocation chromosome mutation occurs when part of one chromosome breaks off and attaches to another chromosome.

What Effects Do Mutations Have on Living Organisms?

The ways mutations affect amino acids vary greatly. The amino acids may not change; the changed amino acid might not affect the protein; the protein might be affected but not essential; or, worst-case scenario, it might be critical for life. The effects of a mutation on the body vary from harmless, to lethal, to even helpful. Many mutations are neutral. They have little or no effect on the expression of genes or the function of proteins for which they code.

Whether a mutation is harmful or beneficial depends on how DNA changes relative to the organism’s situation. Mutations are often thought of as harmful, since they can disrupt the normal functions of genes.

Sickle cell anemia is an example of a harmful mutation.

Directions: Watch the video Sickle Cell Disease Education and Awareness in Your Community to learn more about the effects of sickle cell anemia.

Source
Centers for Disease Control and Prevention (CDC). Sickle Cell Disease Education and Awareness in Your Community. Retrieved from https://www.youtube.com/watch?v=gnrvYsZWR1c.

Some of the variations produced by mutations can be highly advantageous to organisms or species. Mutations can produce proteins with new or altered functions that can be useful to organisms in different or changing environments. For example, mutations have helped many insects resist chemical pesticides.

Plant and animal breeders can make use of “beneficial” mutations. For example, in some plants a mutation causes the plant to have extra chromosomes. This is known as polyploidy. The result is that the polyploid plants are often large, and produce larger fruit. The image below shows polyploid strawberries. 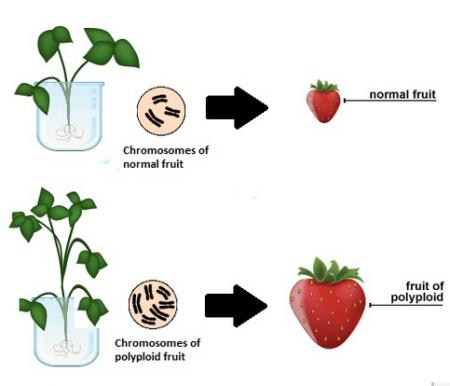 The University of Utah’s Genetic Science Learning Center
Your Genes, Your Health
DNA from the Beginning
DNA and Mutations