A scientist is studying the genetics of a population of plants that she suspects is undergoing natural selection. After examining samples of the population’s DNA over several years, she finds the following data.

Does this provide evidence of natural selection in this population? Why or why not?

A scientist is studying two large populations of deer that are centralized in nearby forests. She takes blood samples from all of the deer in each population and records in how many individuals she finds allele A. She then computes the frequency of the alleles in each population. The frequencies observed over five years are shown in the tables below. 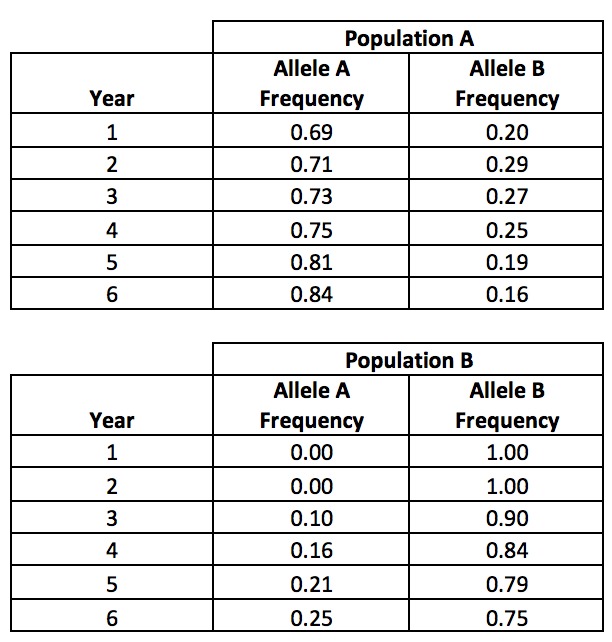 Which forms of evolution are most likely occurring in populations A and B? Explain your answer.

A land manager mows a section of annual grass at the end of July. Over the years, he recorded the date of flowering from the mown field as well as a similar grass field that was not mown. What is the most likely explanation for this trend?

A scientist observed two populations of insects for 10 years. They took data on the length, in mm , of the insect’s mouthparts. Their data is shown in the graphs below.

Figure 19.14
How is this population evolving and what agent of evolution is most likely at work?
33.

Researchers believe that in a fish species, individuals with the recessive genotype aa are predisposed to disease. Homozygous dominant (AA) individuals and heterozygous (Aa) individuals are not believed to be susceptible to this disease. A pond was stocked with 100 fish of the AA genotype and 100 fish of the aa phenotype, and the fish were allowed to breed. In the next generation, 35 percent of the fish had the dominant (AA) phenotype. What does this result indicate?

The graph below shows the change in gene frequency of the two alleles of a gene: A and a. The population being studies has no emigration or immigration. Which type of evolution is likely occurring here and is the allele selected for, neutral, or selected against by natural selection?

The figure below shows the change in gene frequency of the two alleles: A and B. These alleles are located on separate genes that do not influence each other in any way. The population being studied has no emigration or immigration. Which type of evolution is likely occurring here, if at all? Explain how you know.

The graph below shows the current frequencies of two genotypes of the same gene: AA and aa. What would most likely happen to the frequencies of A and a if heterozygous individuals were favored by natural selection? 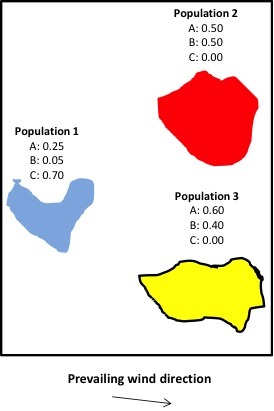